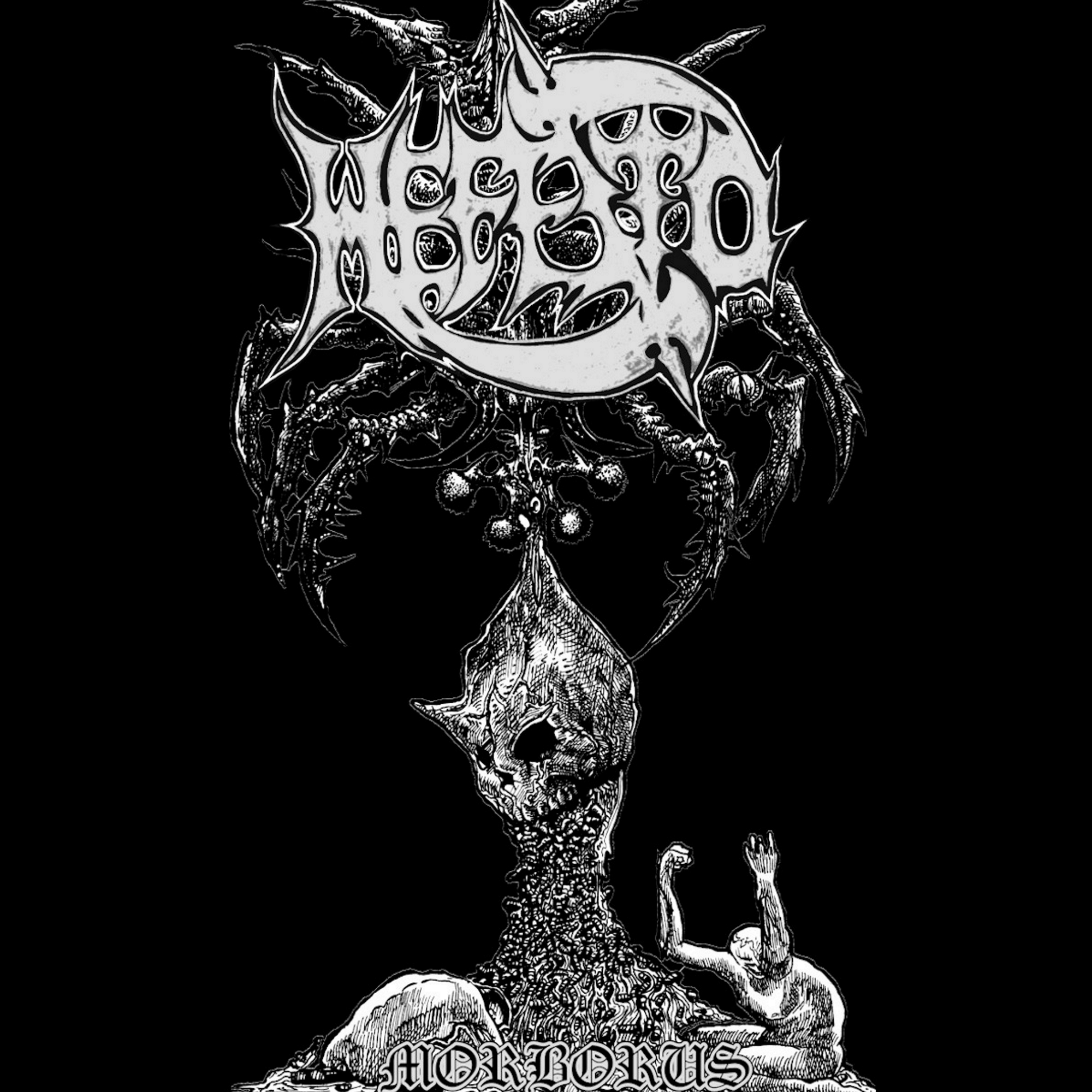 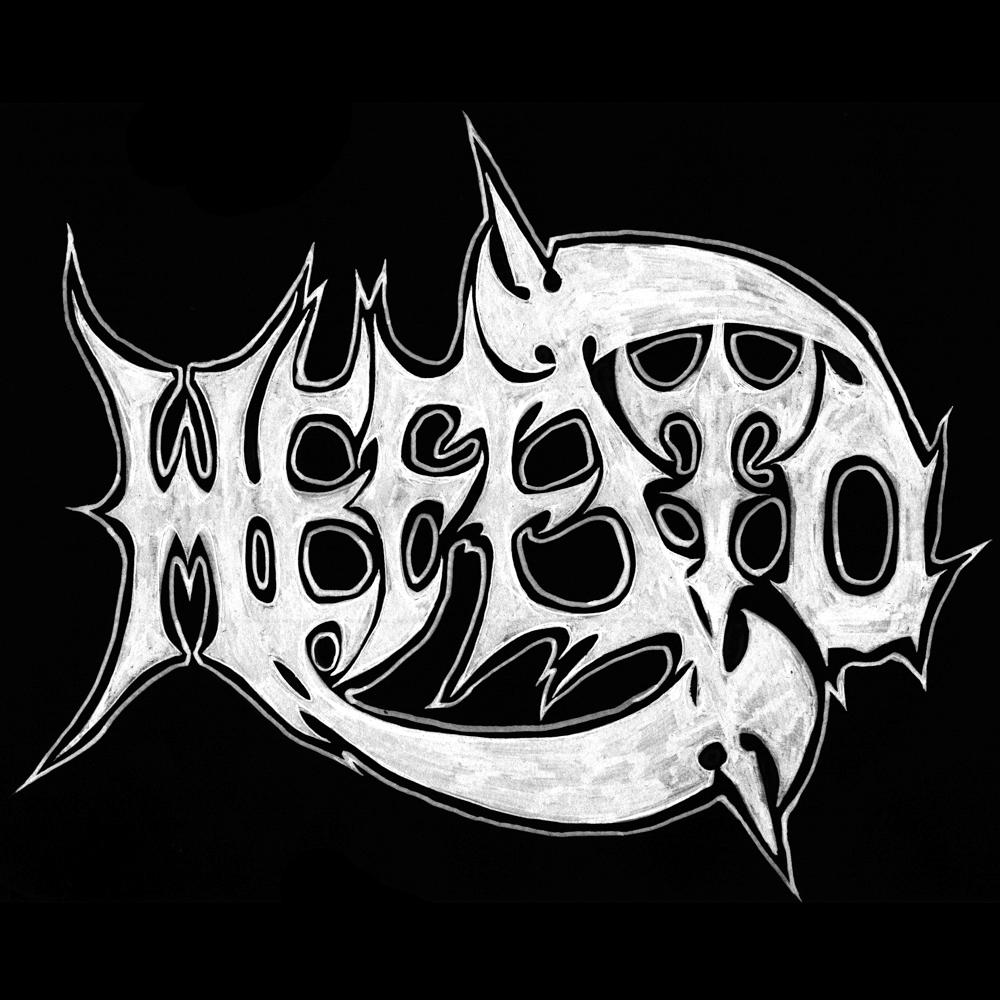 We had a conversation with HEFESTO.Enjoy!

Welcome to the FILTHY DOGS OF METAL Webzine.
Tell us a few things about HEFESTO (Members, Starting Year etc).
Hefesto was founded in mid 2019 after Diego Cozzani (lead guitars) contacted me (Facundo de León) through a page to recruit musicians.
We did not have a clear idea but we had in common our taste for black thrash, first wave black metal and classic thrash metal bands, so we began to compose oriented to that style. Shortly after, a friend of mine (Lucas Cleffi) started doing vocals, since he liked the idea and was able to fulfill the role. In late 2019 we recorded our demo "Morborus" With the help of a friend of mine (unknown death) who offered to record the drums for the demo. Finally we decided to release the demo on cassette under the label extreme resurrection records.

You have recently released your demo ''Morborus''. What is the Feedback from your audience as well as from the Press?
Pretty good! Many copies have been sold outside of Uruguay through distros and labels.After uploading it to Bandcamp and Youtube we have also seen that quite a few people liked it, being re-uploaded several times on Youtube and being shared outside of these pages. 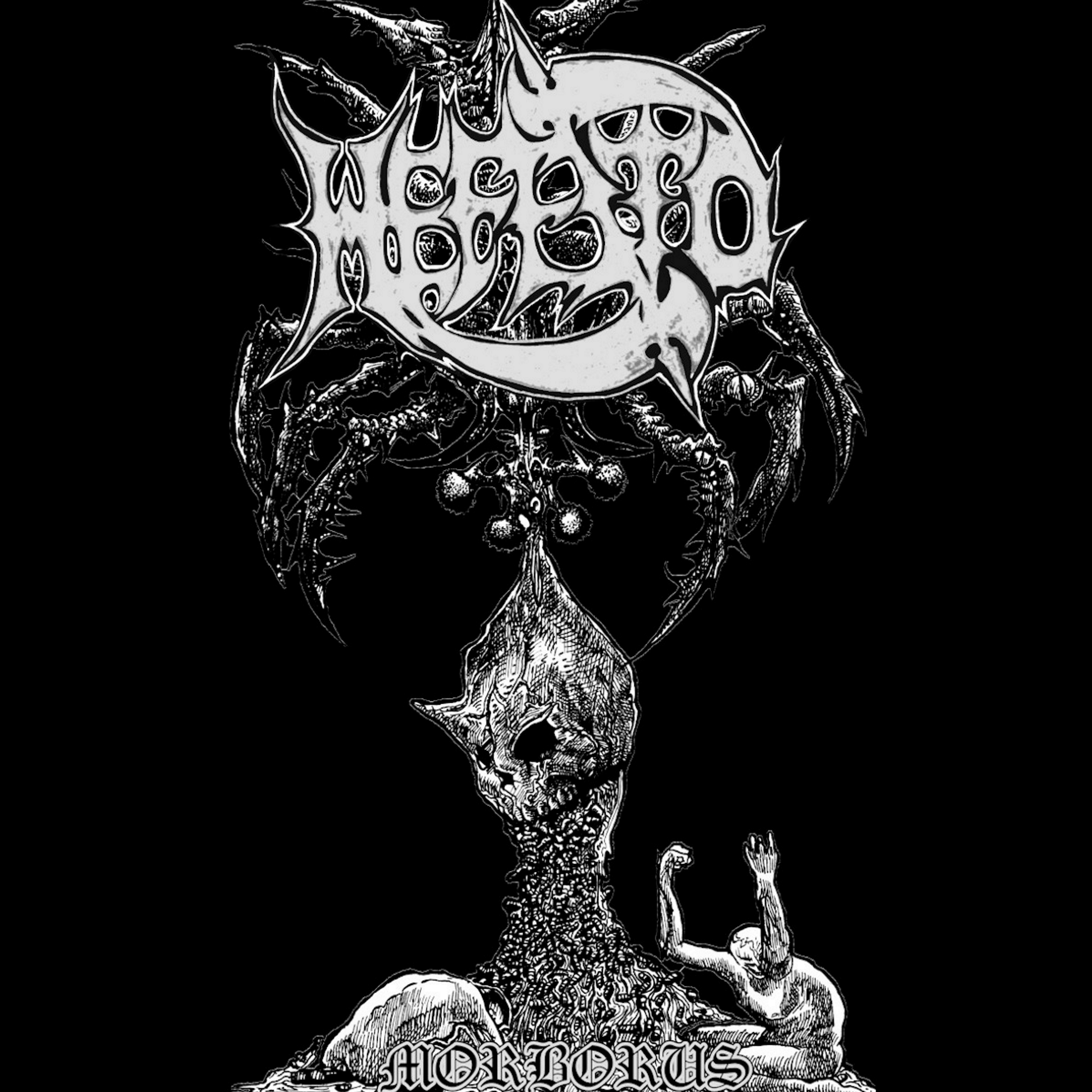 Label or DIY and why?
Lucas: Personally it depends on what's happening at the time, we where lucky to have ERR release our tape, but if we made it DIY, i'm pretty sure it would have been as great as it is now.

Facundo: For me, it depends on what your goal is and what your scope is .If you want your band to be distributed more widely you can choose to edit your material with a label.Also if you have many contacts with distros or labels you can do it on your own but I prefer label.

Diego: Label, because we're not prepared, and formed to make our own label, so, label.

Do you prefer Vinyl, Tape, CD or Digital Format and why is that?
Facundo: I recognize that the digital format is more accessible but personally I prefer the physical format, especially the cassette and, to a lesser extent, the CD more than anything because of its practicality and because they are cheaper.The physical format in general requires a little more commitment with respect to digital, since you need to contact a label or band to get the material, in addition to the feeling of ownership that having that album in your hands gives you is great. Vinyl being more expensive and more delicate in terms of its care, I only consider it if I want to buy a very special album but normally I would prefer to buy or edit material on cassette or CD.

Diego: I prefer digital format, cause of how practical it is, you can listen everywhere and anytime, but, obviously, tapes and vinyl have an another sound and tradition.

Lucas: Anything I can listen to music on is great, I have a lot of records on CD and Digital. I don't have Tapes or Vinyl because I don't have anything to play them on, but maybe in the future I will. 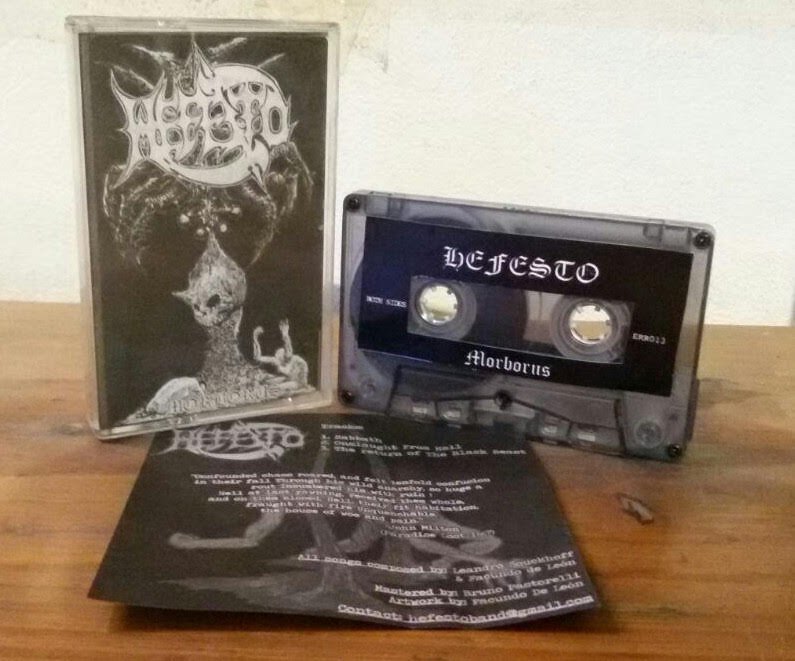 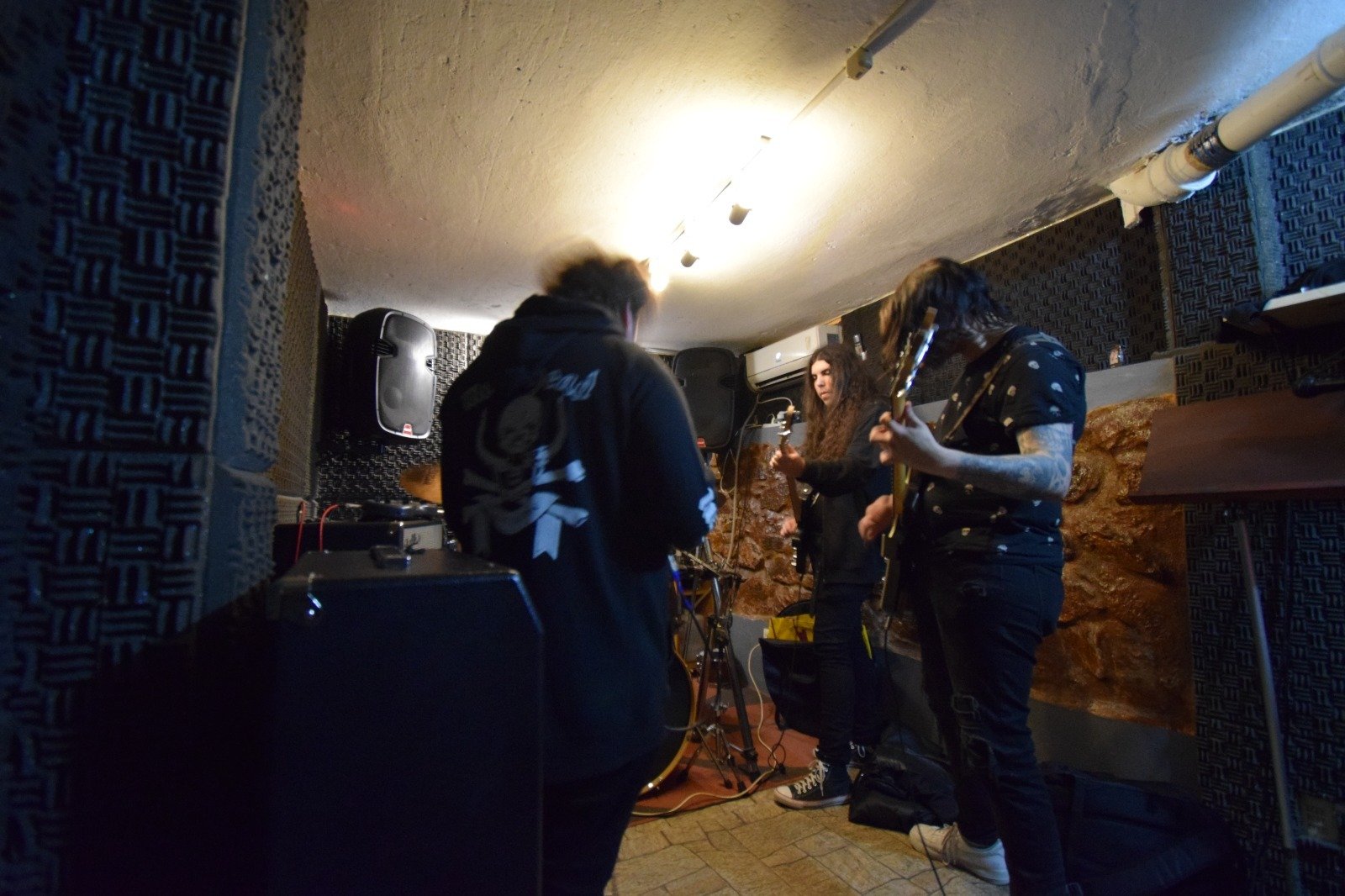 Your music style is Black/Thrash Metal. Which are your main influences (Favourite Artists / Bands etc.)
Lucas: I'm much more into Hardcore, Crust and D-Beat than I am into metal, I mean, I like Black Metal a lot, but the real metalheads behind this are Facundo and Diego, if I was to name a few of my influences they would be "G.I.S.M" from Japan, "Minor Threat" and early "Misfits".

Diego: My main influences are "Nirvana" and "Megadeth", cause there are the bands I used to listen when I was a kid (5-10 years old) but, "Sarcofago", "Mercyful Fate", "Voivod" and "Bathory" make me see that music could be even more cruel and violent.

Facundo: When we started with Hefesto I listened mostly "Bathory", "Hellhammer", "Venom", "Bulldozer","Nocturnal"(GER) and "Cruel Force"(GER) but this last year I started to know many more bands that would end up influencing the band like: Midnight (USA), Diabolic Night (GER), Mefisto (SWE), Deathhammer (NOR), Power from Hell (BRA) (early albums) and Messiah (CHE) (early albums).

Which things, do you think, a Band should sacrifice in order to succeed?
Have you ever sacrificed anything in your life for a better future of your Band?
Facundo: Having a band is expensive, a constant investment of time and money, requires a great commitment to yourself or to others (if that is the case), however the feeling of composing something that you enjoy listening to it, for me any investment is worth, so I don't see it as a sacrifice.

Diego: Being in a band is like a contract with the devil, some times you'll hate your own brothers, some times you love them, is like a job, but...
when you work in something you love, you're not working, I guess the most important thing you need to sacrifice are the relationships.

Lucas: A lot of free time, people would spend their free time off from school or work basically partying or going out with friends and what not,
but we spend ours writing riffs and lyrics for songs, don't get me wrong we like having fun and going to local gigs but we still have much to write and to get done that we spend a great part of our time focused on what we are doing. 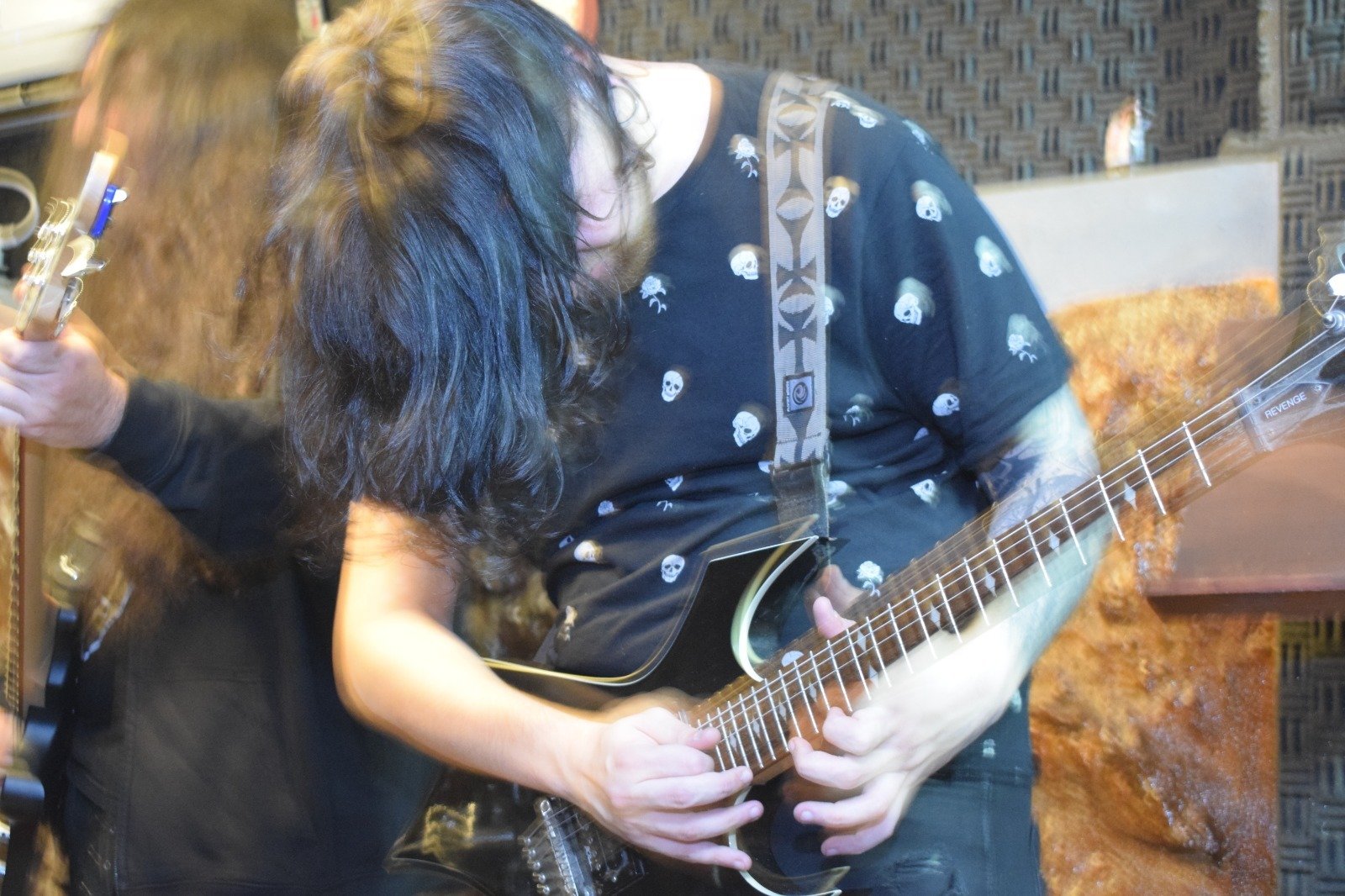 Describe your ideal live show as a performance Band. Have you already experienced that?
Lucas: Any live show and gig where we are comfortable and where people like it is fine by me, even if people where booing us of the stage i'm pretty sure we'll have fun, we do this for music, not to please anyone other than ourselves.

Facundo: I have played live with Lucas on an alternate project once, however we have not yet been able to do a live show with Hefesto as we do not have a regular drummer yet. For me, the ideal live show would be playing with other bands that I enjoy and see that the public is really enjoying what we do.

Which attributes, do you think, that a new Black/Thrash Metal Band should have in order to gain identity and be unique?
Diego: Understanding that Black thrash isn't raw sound, simple riffs and easy beats on drums. That's not the way, that's the way of Bathory, Celtic Frost and some pilars of the genre, that worked in 80's. Now, you must do what the fuck you want, and vomit on Jesus Christ face with a brutal sound going straight out of your throat.

Lucas: They should do music thinking about music, not image, not sales, let what they are creating speak for themselves and focus on having fun, even if they fucking suck.

Facundo: More than anything that is authentic, anyone can listen to a couple of popular bands and say that they are going to do a black thrash project but only by copying what you think that works will you make your band very repetitive. Making music requires passion and dedication. 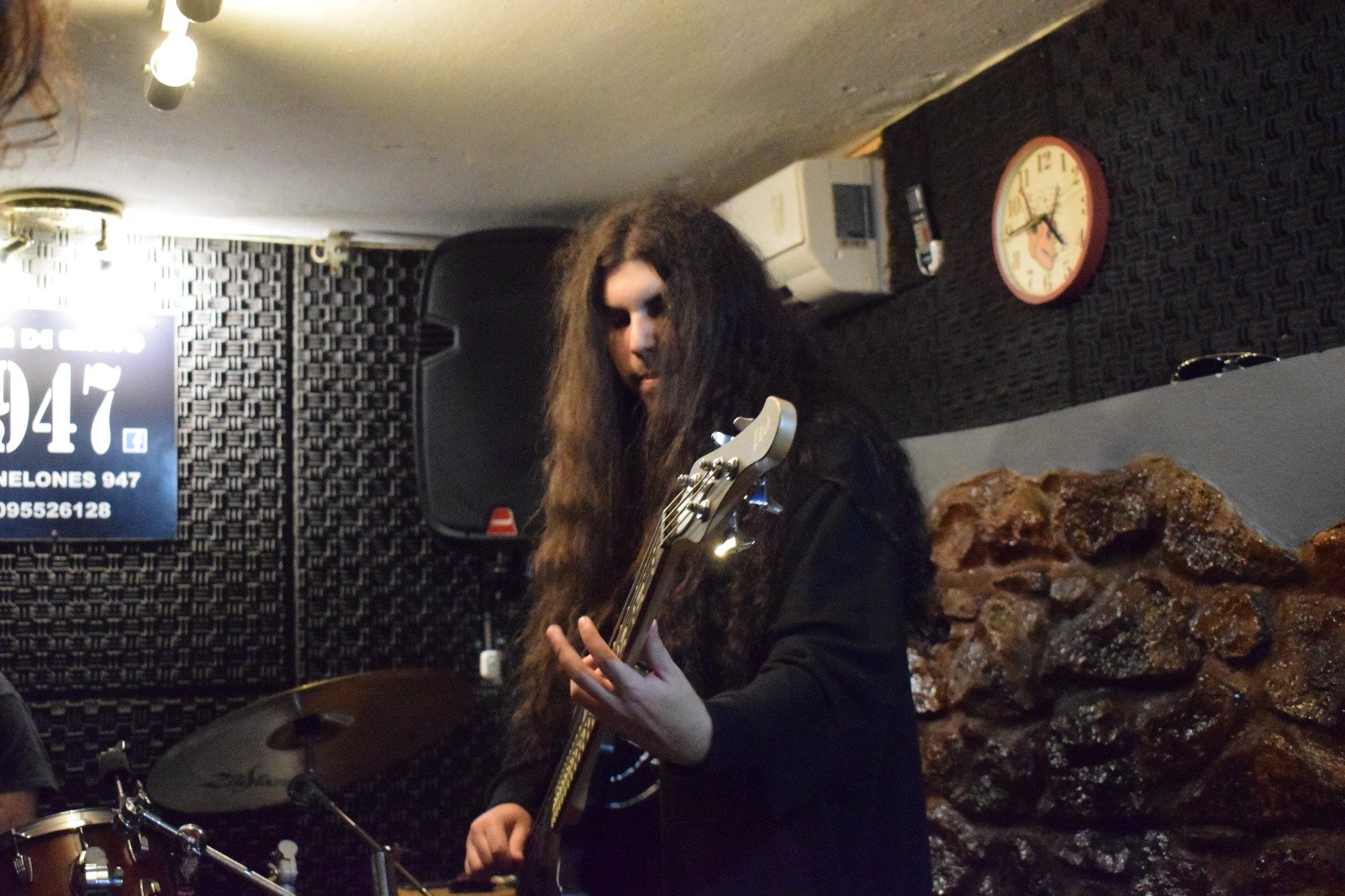 Do you believe that Bandcamp and other Digital Platforms help the new Black/Thrash Metal Bands? Which, do you think, is the ideal way for a Band to promote its work?
Lucas: any band or musician who has access to Bandcamp, Soundcloud or YouTube, especially the new ones are lucky it is that way, they can spread themselves faster and what not, but we still can't forget where this type of music comes from, ''underground'' or not mainstream music in general, we must not forget physical releases of stuff and to keep the people who don't understand it away, not because of elitism, but because of preserving something that a lot of us claim as our own.

Diego: Yes, A LOT, we're on globalization and internet era, sometimes, tradition, and things that have been done on the 80' now are obsolete. Maybe, the underground need to know some things about this new world.

Facundo: I see it as a tool, many people choose to resort only to digital media but doing extreme metal and knowing the underground, most likely you will not get very far. I have also seen in some fanzines and newsletters a lot of propaganda against digital media and I understand the underground tradition and I support it constantly  but the help that digital media can give to promote bands is undeniable. 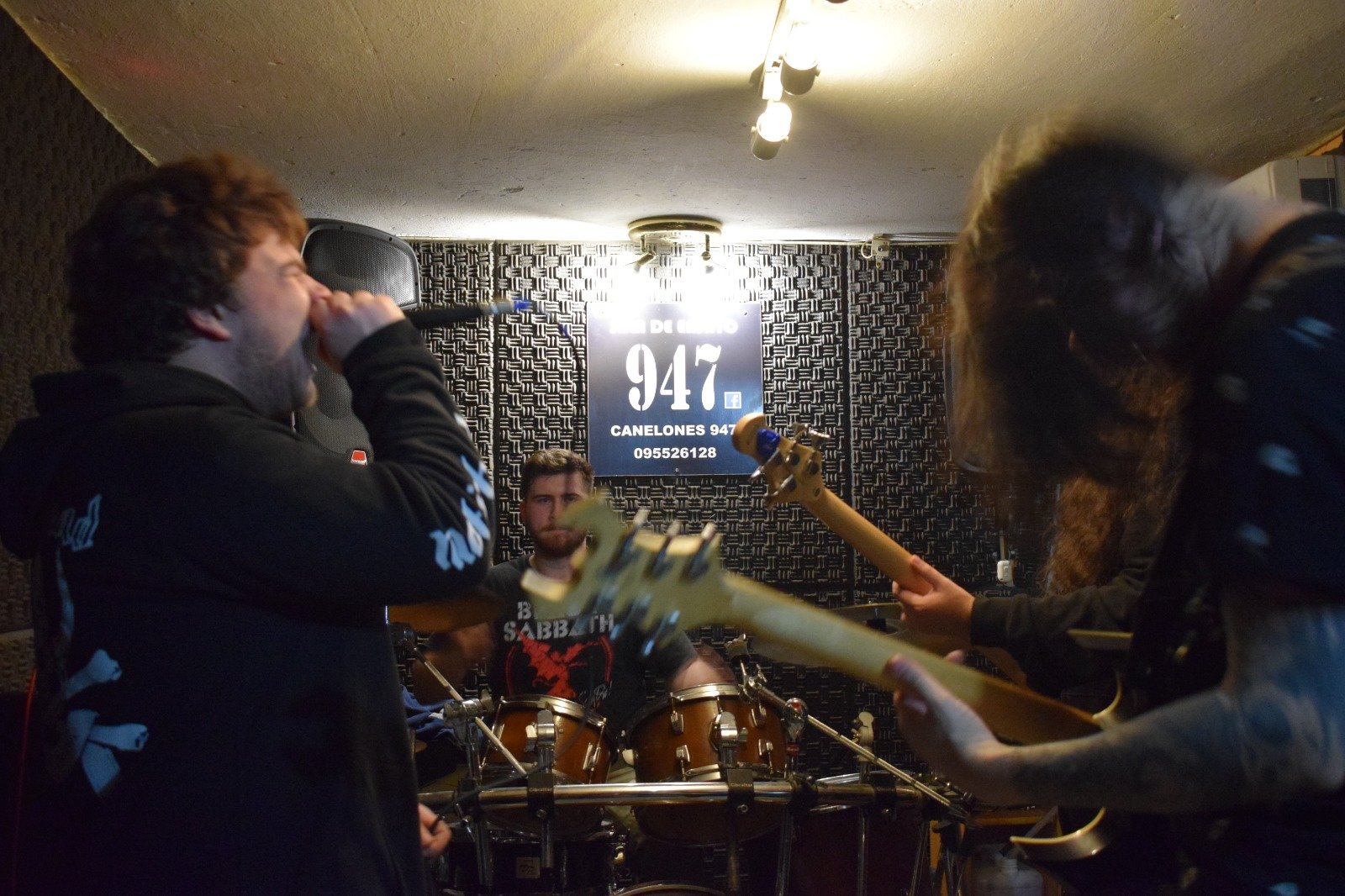 Tell us a few things about the New Underground Metal Scene in Uruguay (Bands, Fanzines, Webzines, Metal Clubs etc.)
Facundo: Lately the Uruguayan metal scene has been a bit quiet, not only because of the coronavirus but since last year many bands have gone into inactivity  and practically no new bands have come out besides us, the last bands I have seen active have been: "Deforme", "Pheretrum", "Marca acme", "Pandemonium" and "Magna", However, due to the lack of new bands, there is a tendency to resort to Hardcore punk bands to be able to give shows with more bands, I don't see it as a bad thing at all,
it gives more variety to the shows and there are a lot of great bands with great attitude and support for the scene like: "Blasfemos" , "Cadenazzo", "Furia Alcoholika", "Insectas", among many many others.About the fanzines, the ones that got to read the most were "extreme resurrection fanzine" (aimed at documenting classical extreme metal bands of the Uruguayan underground along with current bands to spread the word),
"Nuestro Sentir Fanzine" (more oriented towards active bands from all over the world but with more focus on Uruguay and South America) and
"Duro y a la encia fanzine" (more oriented to punk bands and with very interesting articles from history, politics, etc.) About metal clubs, there is a well-known one but I don't think it deserves even my mention being it is run by very obnoxious people,
the real shows are organized by bands in bars and clubs that have nothing to do with metal.

Do you know anything about the Hellenic Metal Scene?
Diego: Personally I love Hellenic Black Metal, like Norwegian Black Metal, Greece has his own culture that was sepulture in the past cause of the Catholicism, and like Romans, we need to admire they culture, "Omega" is a BIG BAND for me.

Facundo: for my part not much, lately I've been listening to "Chainsaw" mostly his reissue of "Hill of Crosses" by Vulkan records. I found it very good with a classic and violent sound very well achieved. I also like "Omega" but beyond that I have not heard so many bands from Greece, I have yet to hear more from the black metal scene.

What are your future plans?
Facundo: We have planned to record an EP and start doing live shows but until we get a drummer we will be composing.

Diego: Make music, try to be the most powerfull band we can make, I know it's pretentious, but fuck. I really want metal to be like it was before,
we need more new bands, young people, angry persons that fucking want to release all their hate, and make catarsis with music.

Thank you very much for your time & Keep up the good work! The closure is yours.
Lucas: Thank you for interviewing us, it was fun!!

Facundo: Thanks to you for giving us this space and the support, it has been very pleasant to participate in this interview !!

Diego: Thanks to you, its something I cant believe that a dream that I have from I was child its come reality and now I'm writing this,  thanks to valorate our music, and lets keep the underground alive! 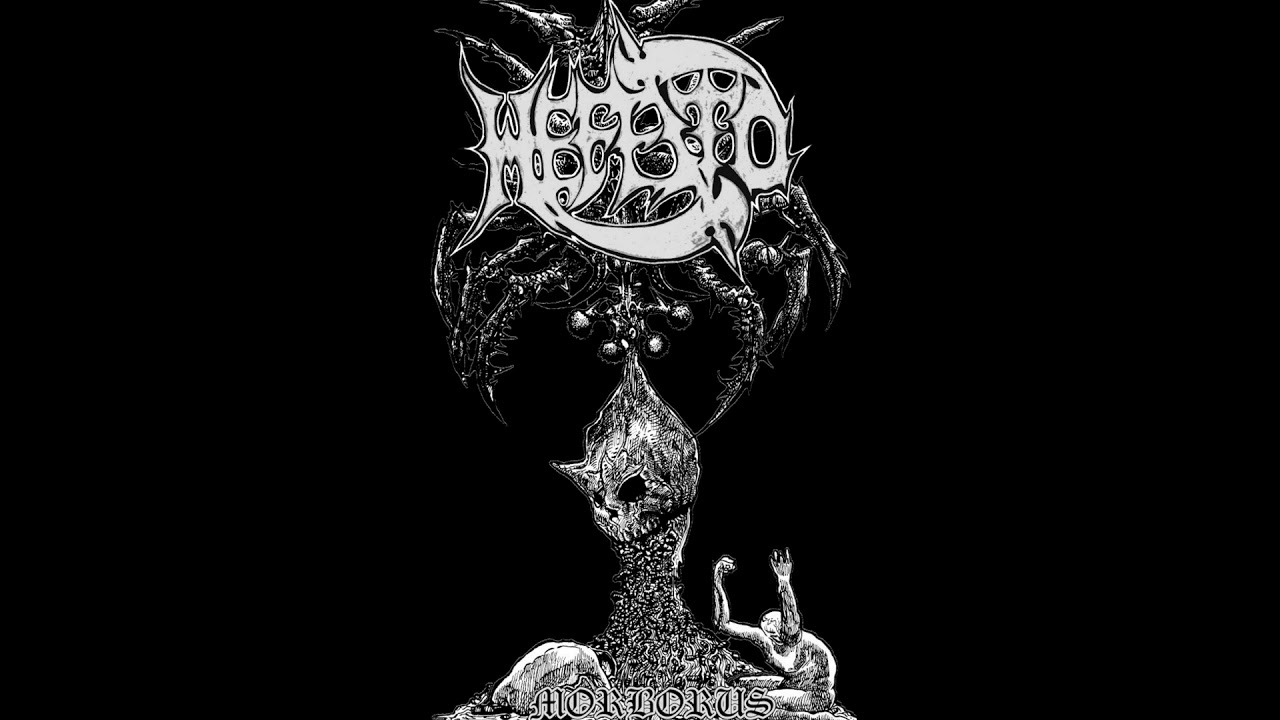