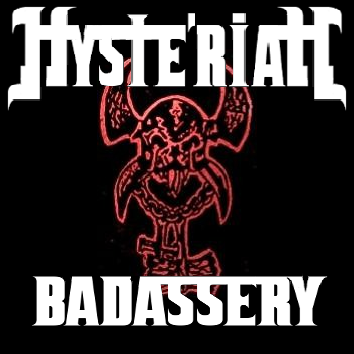 Well, well, well!!What we've got here!! A blast from the past and as they say from the past comes the storm!! HYSTE'RIAH from Sweden are back with their new album ''Badassery''!! What a title!! Great!! Their history started back in 1987 when Jay from D.T.A.L. (Awesome Swedish Punk band which has released 2 extremely rare nowadays singles!) wanted to form a furious Thrash Metal band with hardcore/metalpunk elements. HYSTE'RIAH released 2 demo tapes ''Attempt the Life'' in 1987 & ''Jeremiad of the Living'' in 1988. A compilation with those 2 demos released in 2016 via the Swedish To The Death Records. We also had a very interesting conversation with Jay and you can read it HERE. The new album of HYSTE'RIAH is called ''Badassery'' and it contains 10 furious thrashing songs. The opening song ''Are you good enough'' is like you've been hitted by lightning. Very fast and aggressive track with awesome street metal attitude! Fast thrashing riffs with awesome distorted vocals! The album continues in the same thrashing mood with songs like ''Any Port In A Storm'' (Badass guitar solo) & ''Riot Gear'' (amazing metallic bass lines and a rhythm groove that it is heavy as fuck!). In the continue we hear an amazing cover from D.T.A.L' s - Time To Die!! Next song is ''Behind My Back'', a very fast song with a ripping ear guitar solo!! Next song is the ''Mug Shot'' (so fucking fast) & ''Soon You Will Be Dead''. WOW!! This song is one of my favourite from the ''Baddassery'' album! It is such a sentimental and heavy song with a dark atmosphere especially from the guitar sound which reminds me of the glorious 80s era! Such a beautiful song, well done Jay! Next songs are ''Don't Fuck With Me'' (excellent lyrics!! ''If you wanna play the game, be sure I make you checkmate''!!), ''Get Your Head Out Of My Ass'' (Very technical song!) and the album closed with the ''Greed''. A badass song with beautiful distorted bass lines & fast heavy guitars (is like you hear a rain of bullets)!! I'm very glad that HYSTE'RIAH is back and thank you so much Jay for sending me this awesome CD!! I must mention here that Jay has played all the instruments on this album, he has made a heavy and clear production and generally he is the main person behind the band HYSTE'RIAH!! Jay, you have done an amazing job here! So, fans, maniacs, freaks and labels out there, support HYSTE'RIAH and their newest album ''Baddassery''. Don't be a whip and get this album as fast as you can!